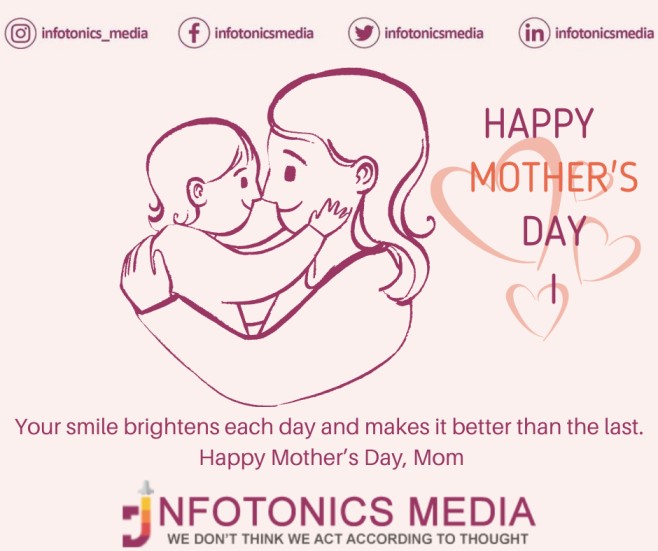 Mother’s Day : A Day to cherish the many contributions mothers make to our lives 

A mother is present in every step of our life, from feeding us our first meal to hearing our first words to tolerating our upheavals to offering us a shoulder to cry on as we grow older. Mother’s Day is a day to honour our mothers’ unselfish love and every sacrifice they make for their children. People commemorate moms, mother-like personalities in their life, and even grandmothers on this day.

Mother’s Day recognizes the contributions our moms make in our lives, which are often forgotten. Their contributions are frequently overlooked. Furthermore, our moms seldom have time to care for themselves since patriarchal society has taught them that they should not take a vacation. Caring for their children and families takes first. However, this should not be the case. So, on Mother’s Day, let us remember to constantly show our appreciation for what our moms do for us and to advocate for their rights. On this day, we also recognize every mother’s incalculable and selfless commitment to her children’s achievement. It is a day to express gratitude to her for everything.

Every year on the second Sunday of May, it is observed. Motherhood Day will be celebrated this year on May 8th. It is also observed in numerous places of the nation in March. Mother is someone who cannot be forgotten. Life on Earth exists because of them. So, let us honour and appreciate all Mothers’ across the world. On this day, various presents are given, campaigns are organized, and numerous phone calls are made to wish mothers and make them feel special.

Mother’s Day was established in the early 1900s. In the United States, Anna Jarvis wanted to make Mother’s Day a recognized holiday in order to honour her mother, Ann Reese Jarvis, a peace campaigner who had died three years before. It was made a national holiday by US President Woodrow Wilson in 1914. Ann Jarvis, often known as “Mother Jarvis,” was a community health advocate at the time. During the Civil War, she organized women’s brigades and requested her employees to support mothers and do all they could to help them. She had also organized a number of Mother’s Day groups that focused on child parenting and public health problems. In 1868, she took the initiative to reconcile her Confederate and Union neighbours.

Furthermore, more than a century ago, women’s suffragist and Boston poet Julia Ward Howe organised a unique day for mothers and peace, which had been lacking since the horrific Franco-Prussian War.

After several failed attempts, she began to think globally, and at an international pacifist conference held after the Franco-Prussian War, she made a global appeal to women. She felt the “cruel and unnecessary character of the contest” during the war, she wrote. She believed as any woman would, that it could have been settled without bloodshed. She also wondered why women or mothers did not unite in these matters to prevent the waste of human life, for which they alone bear and know the cost.

However, Mother’s Day’s voice for peace was successful in Boston at the time, but it ultimately lost popularity and faded from people’s memories in the years leading up to World War I. The consciousness of mothers’ day became relevant in the latter half of the previous century.

It is critical for the advancement and continuation of human civilization that we honour our moms by carrying out our obligations to them in truth rather than putting up a front. Mothers give birth and raise their children out of genuine love and affection, and they demand the same from their children as they mature into responsible adults. Showering cards, flowers, chocolates, and other presents are certainly appreciated by women who are mothers or mother figures, but they would be even happy to be loved, cared for, and acknowledged for their unselfish efforts.

If we go further into the notion of Mother’s Day, we will discover, like many others, that every day should be Mother’s Day. They are unwavering in their commitment to assuring and working for the well-being of their children, day in and day out, without fail or break. As a result, we as children must be more sensitive and appreciative of this reality, and we must appreciate every minute of our life for the sacrifices they have made for us.

No specific day is required to honour and cherish our moms. They are designed to be treasured every day and year. To commemorate this exceptional day, we can celebrate mothers’ day by surprising our mothers by giving them handcrafted presents, taking them out to dinner or cooking at home, having a movie night, or doing something else.